I remember well, about 20 years ago in Holland we were so excited. We had found (thanks to the internet) Natural horsemanship, after the encounter with a look-alike ‘fake’ trainer a friend decided to go to the source. After she came back from her working student holiday. She showed me how it was done. Because my horse was not backing up, she told me I was too soft. And she showed me to use a firm fase 4, at the yo-yo game. It felt horrible to me, it just felt wrong. But who was I. Now I am 40 and I feel the need to shine a light on some things. Pressure release is a commonly used tool in all kind of horse training, but it is not so well performed by mister Parelli. Lately I read it in an article about equitation science (1) They did not explain how, but according to the scientists NR (negative reinforcement) was misunderstood and incorrectly defined by Parelli, they said. As well as did most Australian horse trainers stated the raport. (1)

Is a common used technic in most horsemanship methods. And in classical conditioning as well, horses learn to yield for pressure. Pressure of the reins or pressure of riders leg for example. Aply pressure untill horse responds and then release the pressure so he learns to avoid it next time and you have teached your horse how to respond to that stimulus. Nothing wrong with the concept as long as the pressure does not escalate or causes pain!

Positive punishment is the adding of something aversive ( like pain) after an undesired behaviour has been performed in order to decrease the likelihood of that behaviour occurring in the future. Positive punishment can have negative welfare implications and should be avoided. If used, it should be carefully timed to coincide with the occurrence of the undesired behaviour. (2)

About the use of pressure and release as it is used in the well  known the ‘ yo-yo game.’ :

My question is. When does the pressure from being unpleasant stimuli changes into pain? When turns the pressure release into punishing? How can someone justify using pain as motivation? Backing up a horse wiggling the rope halter causes pain on the nerves of the horse head. The knots of the halter are placed exactly where most of the nerves are found on the horse skull.  Shown in the picture below: 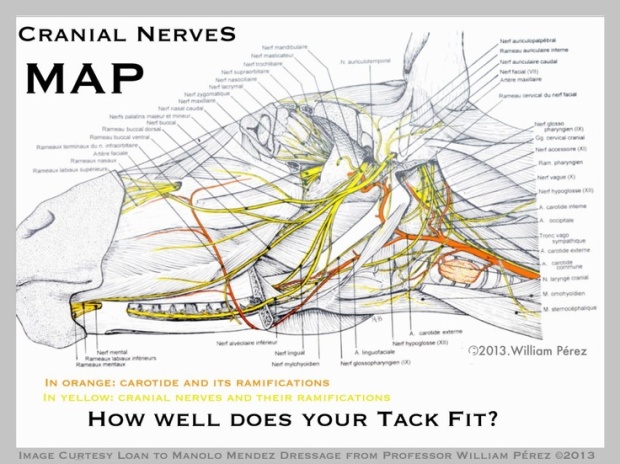 They call it teaching the horse to yield for pressure… Most horses first response to the yo-yo game is bracing against the pressure/pain. Because that is the nature of horses. Then the human adds more pressure/pain, this causes stress and conflict in the horse.

The horse learns by trial and error that stepping backwards will get him out of misery. This has nothing to do with respect for the horse, and nothing to do with respect for the human. The end result: horse backs up when you just wiggle you finger at him. Because he had learned to avoid the pain and aggression from his human. We can discuss if this is yielding for pressure or a flight response. 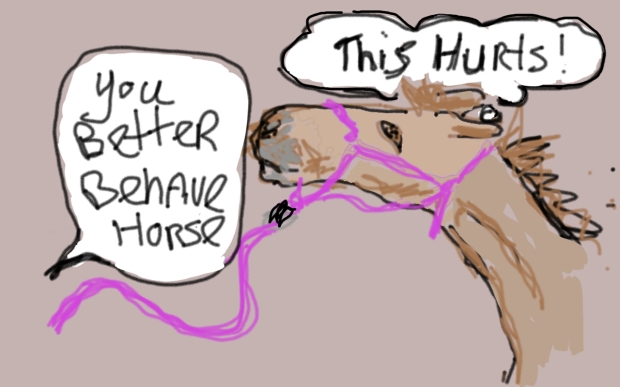 If you want to learn your horse to back up you don’t need to hurt your horse. It is a simple exercise and can be teached in peace and harmony. Naturally a horse will brace against pressure and to teach him something against his natural instinct we must show empathy and needless to say avoid stress and pain.

Always trust your instinct. If something does not feel right do not do it to your horse. We do not live in the middle ages anymore.

Let the horse be with you.

Spread the word, the horses deserve a better world and more understanding.